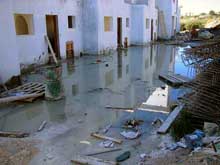 Building land in areas of Cyprus that are popular with expatriate home buyers is in short supply.

As a consequence, property developers build in areas that are totally unsuitable - such as areas prone to flooding as shown on the right. They will also demolish roads and sometimes even take parts of existing home owners gardens. The more properties they can build, the more money they can make.

Developers will also start construction work before they have been granted the necessary planning and building permits. So even if the authorities were to reject planning applications, by the time they get to see the plans it is often too late.

Click on any of the photos below to get a larger picture.