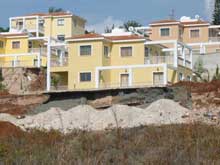 Many of the luxury properties in Cyprus are constructed on a reinforced concrete float (or slab). The idea behind this is that in the event of an earthquake, the house will remain intact.

Before the concrete float is poured, the ground is levelled, compacted and a layer of grey chippings is added and rolled to provide a firm base (you can see the grey chippings in the photograph on the right).

In popular expatriate areas such as Paphos, where suitable building land is at a premium, developers resort to in-filling storm water ditches and rainwater gullies to increase available building land with disastrous consequences!

Some developers even build properties on unstable land composed of bentonite and melange landslides. These clays absorb huge amounts of water, expanding by as much as 15 times their original volume and shrinking back as they dry out. The extreme forces exerted as they expand and contract wreak havoc on to properties built on them.

Luxury Properties in Cyprus: In a state of collapse

Click on any of the photos below to get a larger picture.