Unlike some other countries, Cyprus does not have a large property market. Around 20,000 new dwellings (apartments, villas, townhouses, etc) are built each year.

Actually, there are two markets:

At the present time there is a glut of property on the market. One property advertising company currently has more than a years supply of property (20,000) for sale on its books.

The delay in issuing Title Deeds results in existing investors being unable to sell their property to anyone but a cash buyer. (This is due to the fact that the Cyprus banks will not grant mortgages on resale properties that do not have their all-important Title Deed).

Many developers and companies marketing overseas property in Cyprus continue to promote the island as an ideal investment opportunity claiming that the island has "bucked the trend" of the credit crunch. Some still talk of "phenomenal" returns, while others are saying that you can get up to 30% per annum rental return.

However, the latest independent assessment of the market carried out by RICS Cyprus (The Royal Institute of Chartered Surveyors) and published in July 2011, presents a somewhat different picture: 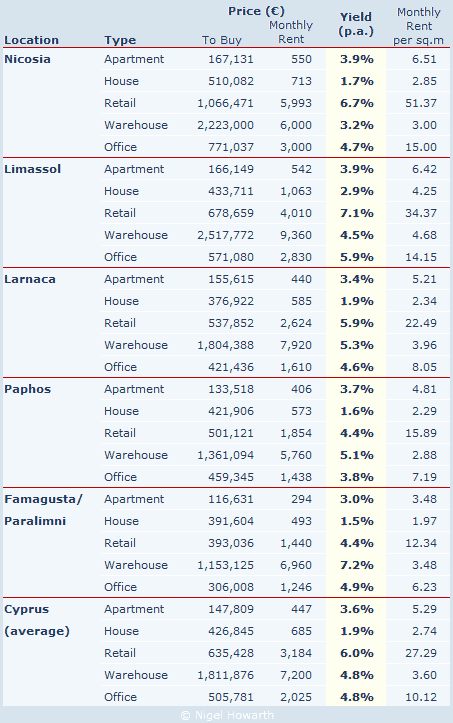 There are a number of factors affecting Cyprus’ position in the international property market. Some of these are due to external influences, others are due to home grown issues.

A study showed that foreign nationals from different countries prefer to live in different areas of the island:

In recent times, many well-heeled Russians have bought property in Limassol, which has helped to bolster prices and sales in the area.