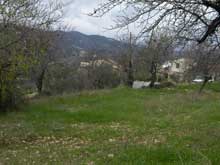 If you're buying a custom property, buying land in Cyprus is a prerequisite. Property developers have acquired large banks of land, particularly near the coast. However, it is relatively easy to find land for sale because it is either too small or uneconomic for their large-scale developments.

My wife & I bought our land when we decided we wanted a custom home. After several visits to the island and a good deal of research, we finally bought a building plot (οικόπεδο) in Erimi, a village near the coast between Limassol and Paphos.

Once we decided where we wanted to live, finding the land was easy. We drove around the area keeping an eye out for 'For Sale' (Πωλούνται) signs and asking people living in the village if they knew of any land for sale. We found our plot two days later. It formed part of an old agricultural field that had recently been re-zoned.

The family who owned the field had partitioned it into six building plots, two of which they planned to give to their daughters when they got married. Within 2 weeks we had found a lawyer, checked the land out to ensure everything was OK, signed contracts, visited to the Land Registry with our lawyer & deposited our Contract of Sale for Specific Performance, and paid the family for the land.

Finally, our lawyer made our application to the Council of Ministers for permission to own the land (This is no longer required for EU citizens)

It is important to recognize that there are two types of land that you can buy: 'building land' (in Greek οικόπεδο - pronounced ikόpedo) and what I call 'other land'.

Although you may be tempted to buy other land on which to build your property, doing so can be extremely risky unless you've done your homework properly:

Advice when looking at land for sale in Cyprus

Check that the sheet/plan/plot/references written on the land's Title Deed agree with those on the Site Plan.

Look at the Site Plan; from its boundaries, shape and location, look around you and identify roads, buildings, and other features shown on the Site Plan.

Build(ing) Factor: The maximum number of square metres that you are allowed to build expressed as a percentage of the land area.

Site Coverage: The maximum area of the site that can be occupied by a building’s ground floor expressed as a percentage of the land area.

Height and number of floors allowed.

Usage: What type of structures can be built on the site - can you build a property?